Hi y'all
I am participating in Sally Russick's Colors of Spring blog hop.  Sally put out the challenge to select a one of Pantone's Spring and Summer 2012's colors.  Two sets were done in each of the Pantone colors except for Tangerine Tango four sets were done in this color.  For me it was a toss up between Margarita and Cabaret, since I just did a challenge involving a color close to Cabaret I chose Margarita.

(The following segment was borrowed from of Sally's blog)

The lentil was torch fired glass enameled in one of the Pantone 2012 colors (chart below) and the accent beads were enameled in contrasting or complimentary colors.

Here is the set I received in the mail from Sally the lentil is of course Margarita and the other four beads are Driftwood.  I was totally stumped as what to do with these beautiful beads.  I kept them on my work table, I looked at them, held them, caressed them, then one day the idea came to me as what to do with them. 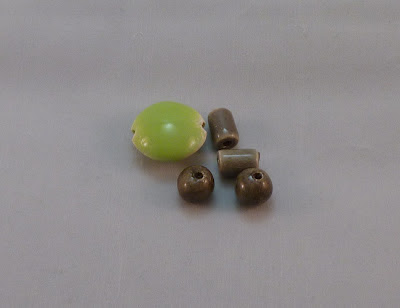 Last month I purchased some of Marsha Neal's silk bundles so I pulled a Solar Power yellow and a Cockatoo blue out of the bundles.  Then I had some of Sue Kennedy's glass spacer beads in different colors so a pulled two Tangerine Tango orange from the lot and got busy putting them all together to create this bracelet. 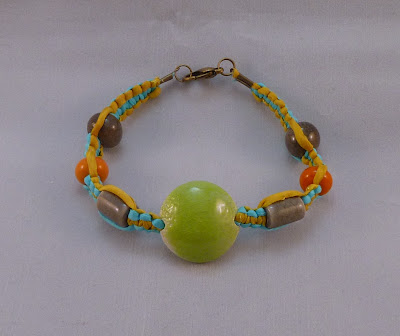 The Shambala style bracelets are very popular right now and making this bracelet with the silk ribbon makes this bracelet very comfortable to wear.  I also just found out that this is the year of the knot, no wonder just about every piece of jewelry you see these days has some kind of knot in it.  I chose to use a lobster clasp because I was not sure how much of the ribbon I would have left after tying all of those knots. It takes away from being adjustable, but this bracelet will fit up to a nine inch wrist.

with the Cockatoo blue going down the middle

Thank you for stopping by and viewing what I created with Sally's beads.  Please go by and see what the other participates have created with their beads from Sally.

Ok one more time, but it is for a good reason that I am posting again.  Over at Lori Anderson's Pretty Things blog she is having a giveaway of three different DVD's by one talented craftsman, Scott David Plumlee.
1. Make Wire Wrapped Jewelry - Precised and Chaotic Styles
2. Make Chain Maille - Single, Double, and Byzantine Chains
3. Make Chain Maille volume 2 - Flower, Dubious, and Inca Puno Chains

Go on over to Lori's blog and find out what you need to do about winning one of these wonderful and informative DVD's.

Happy beading Y'all,
Therese
Posted by Therese's Treasures at 5:47 PM No comments:

Wow two post in one day, I need to check my temperature, because surly there is something wrong.  LOL! All kidding aside, this second post is to tell y'all about a giveaway at Helena's new blog Field & Lake.  Helena is giving away some wonderful gemstone beads.  Go check out her new blog.  If you were a follower of her old blog, then try her new one on for size.  If you have never followed her then check her out and see what she has to offer. Helena does beautiful work you will not be disappointed.

I Heart Macro - Orchids and Chewy

Hi Y'all,
I have been absent from I Heart Macro for a few weeks I have been busy with other things.  Every Sunday I had good intentions to post, but something always got in the way.  Well I was determined to post this Sunday. 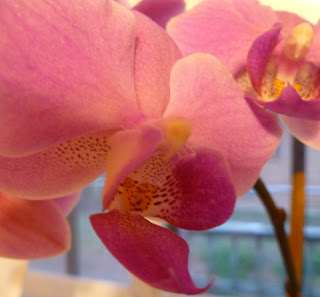 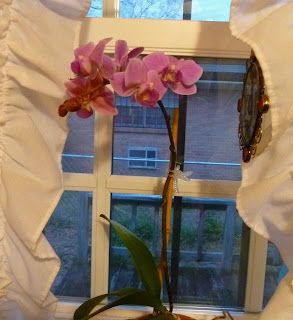 I now sits on the window sill in my Mom's kitchen.  Look how tall and proud it looks sitting there in the window.

Those that read my blog will remember that I lost my sweet Loki a few weeks ago.  He was old and just decided that it was his time to go to Dogie Heaven.  I was not going to get another pet, but one day a week or so ago I was surfing the net and went to my local Humane Society's page and saw this cute little guy and instantly fell in love.  So I called to see if he was still available for adoption, he was so after work I went and adopted him.  His name at the shelter was Junior, but I did not like that name.  I pondered on another name for him all the way home.  The first thing the little guy did when I put him down outside when we got home was go for my pants leg and start tugging.  I named him Chewy cause he likes to chew and he is Chihuahua! 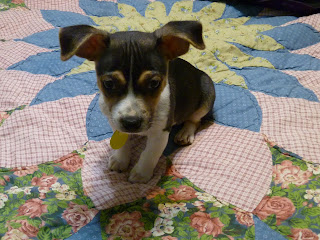 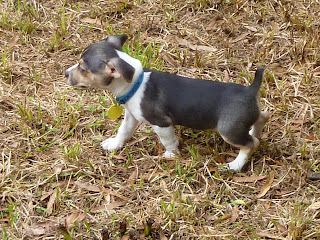 Being a good boy and going potty outside! 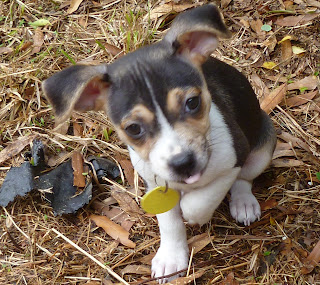 So cute sticking his tongue out at me!

A few macro shots of Chewy 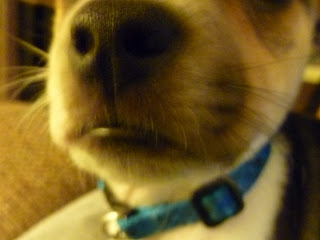 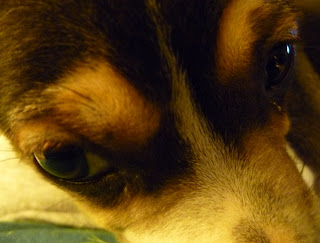 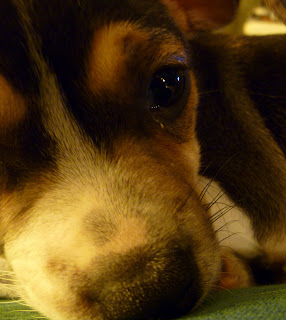 I hope you enjoyed viewing my I Heart Macro shots today and if you would like to view more I Heart Macro head on over to Lori's Studio Waterstone  blog and see what everyone else is I Heart Macroing.

Happy beading Y'all
Therese﻿
Posted by Therese's Treasures at 9:41 AM 18 comments: It is the reveal day for Michelle Mach's Suddenly Spring Challenge.  Michelle had a few of these very pretty aqua colored faceted glass roundel bracelets (pictured above), that she decided she would put out there for a challenge.   One could leave the bracelet whole and add more strands to it or one could take the bracelet apart and use all or some of it to create your own piece of spring time beauty.
I chose to take the bracelet apart and use in four different pieces of spring time beauty.  Here is what I created.
Montgomery, AL has only one independent bead store, but there is a Hobby Lobby, Michael's, Joann's, and of course WalMart.  Well I was in Hobby Lobby looking around for something beady and I saw these acrylic flowers and butterflies and thought yeah these would be great for the Suddenly Spring Challenge so I grab a string of each.  Then I saw these fancy cut glass beads in beautiful sparkling colors so I grab a string of those too. A few clasps, and other stuff that did not go into this necklace, checked out and off I went to create while the idea was fresh in my head.

The earring wires came from Michelle as an added bonus.

I did not use all of the roundels in the above necklace so on another trip to Hobby Lobby, I just live a two miles from this place dangerous right, I saw some more neat flower components so I grab them along with some more stuff, checked out and went home and sat and looked at these flower components played with them until an idea struck. 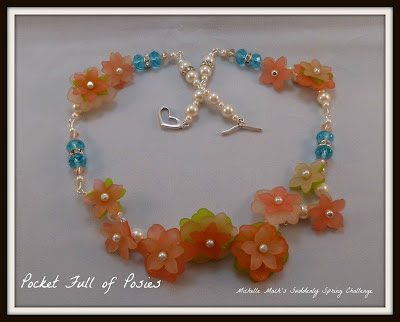 I strung a 4mm glass pearl and the flower components on to a head pin and made a wire loop then I made a chain using glass pearls in 4mm and 8mm, the aqua roundels, the rhinestone spacers, and some fancy cut glass beads.  Connected them all together and I put a heart shaped toggle on it and called it a Pocket Full of Posies.

I still had a few of the aqua roundels and rhinestone spacers left so I got some seed beads out and some 3mm Swaroski bicone crystals and made two Herringbone tubes.  I strung the tubes onto flex beading wire with some bead caps, the fancy cut glass beads, two of the aqua roundels, and three of the rhinestone spacers I used another heart shaped toggle and made a bracelet.  I had two aqua roundels left so I made a pair of earrings too and I call these Spring Bling! 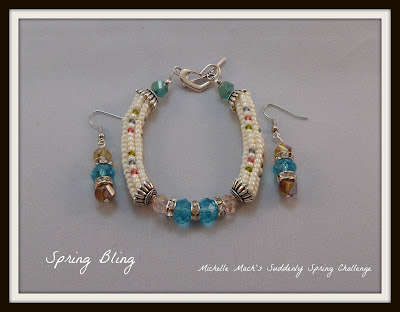 Well there you have it. I really enjoyed this challenge it made me think and I do enjoy a challenge that makes me think on how I will used the focal item.  Thank you Michelle for thinking up this challenge and providing the focal element I really had fun with this one.

Here is a list of the other participants in this challenge. Please go by their blogs and see what they created.

Therese  - Therese's Treasures You are here

It is time to show what I did with the Beading Babes Project # 3.  We voted for two different patterns out of a choice of five patterns.  The winners were Ravishing Rosettes by Smadar Grossman in the December 2011 Bead and Button magazine and Runway of Pearls by Barbara Falkowitz in the December 2011/January2012 Beadwork magazine.

First one up is Ravishing Rosettes...
This one gave me fits I started it five times before the light bulb finally went off in my head.  The fourth attempt I decided to make a pair of earrings instead of ripping out the beads and starting over.  The colors I chose for my rendition of Smadar design was blue and bronze.  One set of size 11/0 and 8/0 seed beads are Iris blue. The 3 mm Swaroski crystals are Paris blue and the 6 mm Swaroski pearls are Tahitian blue and of course the other size 11/0 and 8/0 seed beads are bronze.  I took many pictures trying to get a good shot that show all of the components that I used making this necklace, but the colors of blue I chose are very dark and hard to photograph so this is the best one I could get. 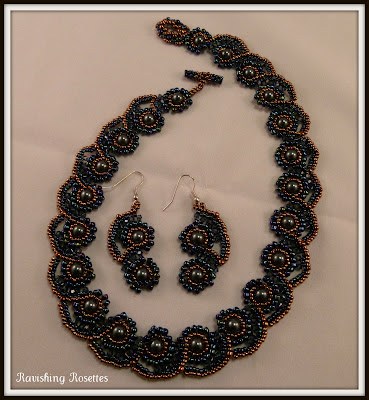 The pattern used a Lobster claw clasp, but I was not feeling that so I made a beaded loop and toggle clasp. Once I got the hang of this pattern it took me about 12 hours to make.

On to the second one Runway of Pearls...
The bracelet I thought was going to be the harder of the two pieces to do, because it was RAW and RAW and I do not have a nice relationship.  I was so wrong!  Once I got started I had the base rows done before I knew it, but I had to stop, because I had to go to my paying job.  Don't you just hate stopping when you are on a roll?  Well anyway I thought about it the whole 8 hours at work and could not wait to get home and work on it some more.  When I did get home I stay with it until it was done.  In all it took me a little over 4 hours to complete this bracelet. Let's just say the RAW's and my relationship is improving!LOL  For the bracelet I used size 11/0 gray triangles, cream 3mm Swaroski pearls, 3mm AB clear and 3mm Indian Pink Swaroski crystals, and a round box clasp with rhinestones. Yep lots of Bling in this one! 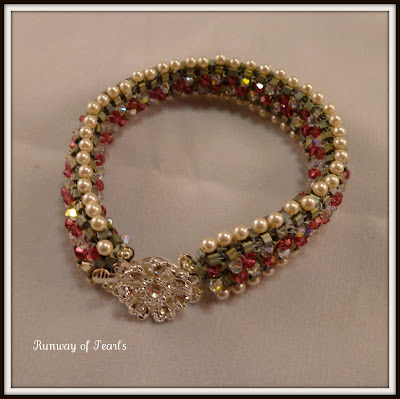 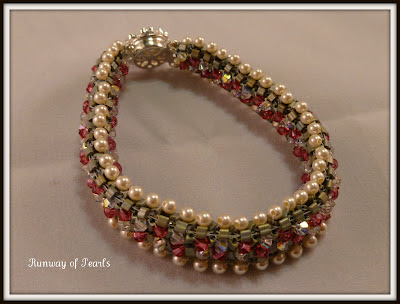 Well there you have it Beading Babes Project 3.  I can not wait to see what is up for the voting in Project 4.  I am so glad that I am a part of this group.  I am having lots of fun and getting pushed out of my comfort zone for sure.