Today is the reveal to Challenge of Travel Blog Hop hosted by Erin of Treasures Found blog and Marcie of La Bella Joya blog.  These two ladies put their heads together and thought up a fantastic blog hop of travel around the world inspired by the Olympics.   The Challenge goes like this... select a region of the planet that you do not live on and choose an inspiration nation from within that region (or better yet, have one chosen for you!).  I chose the continent of Africa and then I chose for Erin and Marcie to surprise me with a county, they chose for me Kenya.   So come along with me on a journey to Kenya.

The following photos, facts, and commentary is copied from The National Geographic website.

Population:
33,830,000
Capital:
Nairobi; 2,818,000
Area:
580,367 square kilometers (224,081 square miles)
Language:
English, Kiswahili, numerous indigenous languages
Religion:
Protestant, Roman Catholic, indigenous beliefs, Muslim
Currency:
Kenyan shilling
Life Expectancy:
46
GDP per Capita:
U.S. $1,100
Literacy Percent:
85
The East African country of Kenya rises from a low coastal plain on the Indian Ocean to mountains and plateaus at its center. Most Kenyans live in the highlands, and Nairobi, the capital, is here at an altitude of 1,700 meters (5,500 feet). Even though Nairobi is near the Equator, its high elevation brings cooler air. To the west of Nairobi the land descends to the north-south running Great Rift Valley—the valley floor is at its lowest near Lake Turkana in the deserts of northern Kenya. Around Lake Turkana, scientists have discovered some of humankind's earliest ancestors—a fossil known as Kenya Man was dated at 3.5 to 3.2 million years old.
Both free enterprise and a measure of political debate helped make Kenya one of Africa's most stable nations after it achieved independence from Britain in 1963. But, more recently, corruption has been an undermining force, and the government—pressured for reform—moved to a multiparty system in the late 1990s. Barriers to progress are high population growth, electricity shortages, and inefficiency in key sectors.
Forty ethnic groups, including Kikuyu farmers and Maasai cattle herders, crowd the countryside, still home to three-quarters of Kenya's people. Intense competition for arable land drives thousands to cities, where unemployment is high. In Nairobi, East Africa's commercial hub, skyscrapers abruptly give way to slums. The government has stepped up efforts to stem poaching, particularly of the elephant and black rhino. Tourism is essential to the economy, and Kenya is one of Africa's major safari destinations.

Photograph by George Steinmetz
Watered by underground streams from Mount Kilimanjaro, the marshes and grasslands of Amboseli National Reserve provide a dry-season refuge for elephants that draw visitors to Kenya from all over the world. The savannas around Amboseli are also a battleground, where wide-ranging wildlife comes into conflict with growing numbers of Maasai and their cattle.

Photograph by Mitch Walters, My Shot
Rapid growth in the number of people living just outside the unfenced Masai Mara National Reserve threatens its giraffes, which compete with livestock for a diminishing food supply. Scientists say the giraffe population has fallen by more than half over the last three decades.

Photograph by Michael Nichols
A lion passes a row of vultures along a river's edge. The big cats once roamed most of the continent. Today they are found only in parts of sub-Saharan Africa. 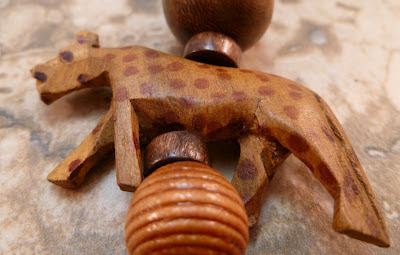 This is the part of my piece that represents the large animals that can be found in the Masai Mara National Reserve.

Photograph by Annie Katz/Getty Images
Beaded necklaces coil around the neck and shoulders of a young Samburu bride. Worn during other important ceremonies as well, such elaborate ornaments can be handed down from mother to daughter for generations.

Photograph by Wietske van de Zande, My Shot
The Maasai people of East Africa have always gone their own way. For them, each 12-month span contains two years—a year of plenty, olaari, that coincides with the rainy season, followed by a year of hunger, olameyu, that begins when the rains end. 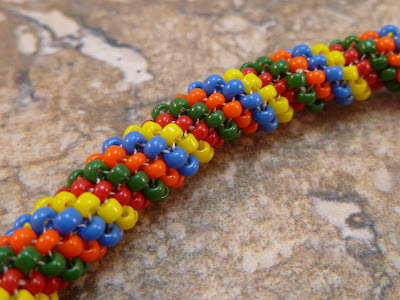 This is the part of my necklace that represents the Masai Samburu tribe.

When I was told that Kenya was going to be my country to get inspiration from the first thing I thought of was a bright color beaded collar, but alas there would not be enough time to do such an elaborate project so I settled for peyote ropes.  While I was doing my search on Kenya I came across a website that explained about the colors in the Masai peoples beaded jewelry. (copied from http://www.africanelements.com)
Colours
For the Masai people the colours of the beadwork have special significance.

Red - danger, ferocity, bravery, strength, and it is the colour of the blood of the important cow that is slaughtered when the community comes together in celebration.

Green - represents the land, the grass and health

is the colour of hospitality.

Yellow Also suggests hospitality because it is the colour of the animal skins on guest beds.

White – Purity, health, peace and the colour of the important milk

Black - the people, hardships in life 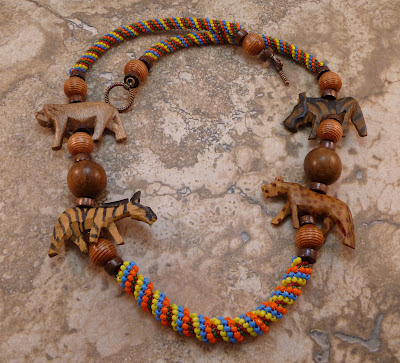 The carved animals were carved in Kenya, but were purchased from my local bead store High Strung Beads.  I used a copper toggle clasp copper is a metal that can be found in Kenya and is used to trade for goods. I used wooden beads in my piece to represent the forest in the mountainous areas of Kenya. 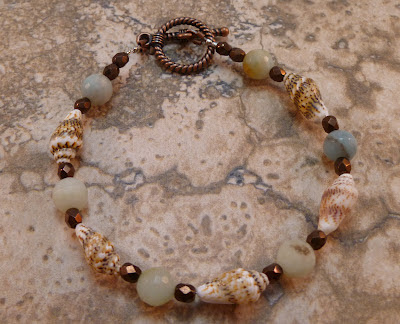 I made the bracelet using shells and amazonite to represent the coastal area of Kenya.

Well I hope you enjoy your trip to Kenya as much as I enjoyed taking you there. Now hop on board your next flight to your next destination by clicking on Erin's blog link here.  Who knows what wonders you will discover.

Happy trails to you until we meet again...


Posted by Therese's Treasures at 7:00 AM