Phantom Of The Opera Blog Hop 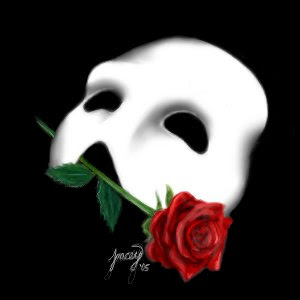 Hi Y'all,
A few months ago I signed up for Phantom of the Opera Blog Hop over at Pam's blog Crazy Creative Corner.  The rules were very simple pick a song from the opera and create a piece, then on August 31 do a blog post about your piece.  First before I show y'all what I did I would like to say thank you to Pam for having this idea for a blog hop.  I enjoyed do the research for this hop.  You see I have this huge crush on Gerard Butler and I did not know that he played the Phantom in the 2004 Phantom movie.  I knew he could sing, but not like this.

I could not decide on just one song "Music of the Night" is my favorite song from the Opera, that was the  song that I would hum while I was making my piece, but then I also really like the song " All I Ask Of You" so I am choosing two songs.

I knew I was going to make a necklace and I wanted it to be elegant and something someone would wear to an opera.  So I started searching Etsy for beading patterns of elegant necklaces and I came across this necklace pattern at Isabella Lam's store Bead4me. This pattern is worked in Right Angle Weave and Peyote.  It was a fast pattern to work it only took me about 4 hours to make.  The colors I chose for this necklace are white pearls to represent the purity of Christine Daae and the white mask of the Phantom. The red to represent the true love between Christine and Raoul de Chagny.   The red roses to represent the roses that the Phantom always left for Christine. 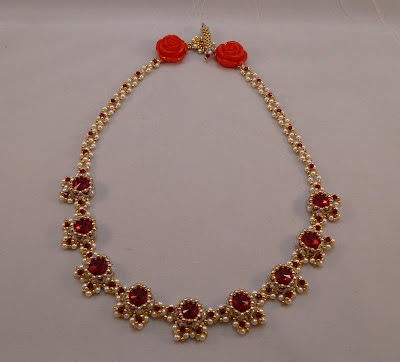 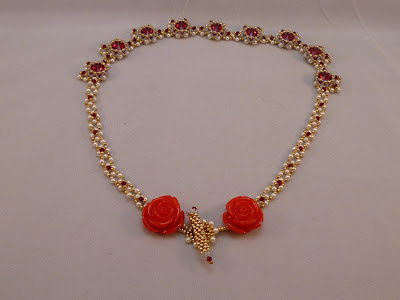 The pattern showed a metal clasp but I beaded a toggle clasp.  I think this looks much better.  This was my first time using Ravolis.

I gifted this necklace to my Aunt Betsy.  She discovered that her cancer had come back earlier this year and has been going through kemo treatments, which she just had her last session and she is well and in remission again.  I gave this necklace to her because I also wanted to say thank you to her, she has always been one of my biggest supporters in whatever form of creativeness I was into at the time and I love her dearly. She was over the moon thrilled with the necklace, oh and red is also her favorite color.  She told me she has the perfect dress to wear the necklace with and that she will be telling everyone, that my niece made this for me.  While I was making this necklace I could picture this necklace being around Christine's neck I think it would have been fitting for that era.

Now go and check out what the others have created.  I know I will be.


Posted by Therese's Treasures at 3:00 AM