Hello Y'all and welcome to my second blog post for today. (If you are looking for the Tiny Tin Challenge click here)

When Erin announced that she was hosting another challenge and this one would be based on literature, I said what the heck I will give it a try.  I knew exactly what series of books I was going to base my pieces on.
I chose Janet Evanovich's Stephanie Plum novels.  I love this series of books I have read all but 17 and 18 and I have those downloaded onto my kindle waiting to be read.  I love these books!  These books have made me laugh out loud and bite my finger nails in suspense of what will happen next, and even cry at times.
The antics Stephanie Plum and the other characters, such as Lula an ex-prostitute, who happens to be my favorite character next to Stephanie of course, get into are gut busting hilarious.  The on again off again love affair between Stephanie and Joe Morelli, a handsome Italian Homicide Detective with Trenton, NJ Police Dept., has been going on between the two since they were in high school.  To throw a little spice into the mix Stephanie has a serious crush on a tall handsome Cuban Carlos Monoso aka Ranger, who is the number one bounty hunter for Stephanie's Cousin Vinnie.
This series starts out with Stephanie looking for a job.  Her Grandma Mazur, a very colorful character, recommend that she go see Cousin Vinnie that owned a Bail Bonds business.  Stephanie was to late for the filing clerk job so Connie, Vinnie's secretary, gave her the job of bounty hunter and Stephanie's life would never be the same.  If you have not read any of these books, I recommend that you get one and read it, but be careful once you read the first one you will want to read the next and so on.  Here is a list of the Stephanie Plum novels-

I based my challenge pieces on Stephanie, Lula, and Connie.  I based my pieces on what I knew of these characters from Janet's descriptions of these three women.  Here is what I created. 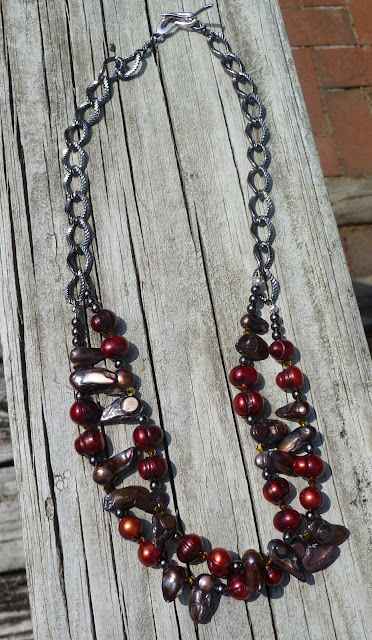 Stephanie is not a very flashy character she mainly wears tank tops, t-shirts, and jeans. This necklace is light weight and will go with just about any thing. It would look good on Stephanie whether she was dressing down or up.  Stephanie is a natural type of female, but not your average type of female that is why I chose to use potato and dagger fresh water pearls in red and bronze.  Between the pearls are gunmetal color metal 4mm beads and gold colored 3mm bi-cone beads. I connected the two strands of pearls to a gun metal colored chain, then I added a silver tone heart shaped toggle clasp. 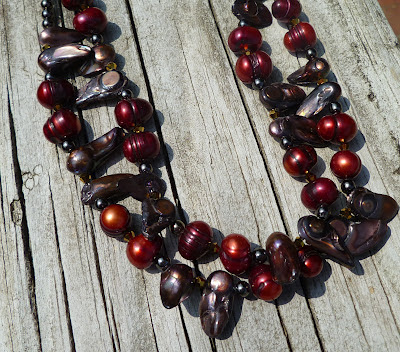 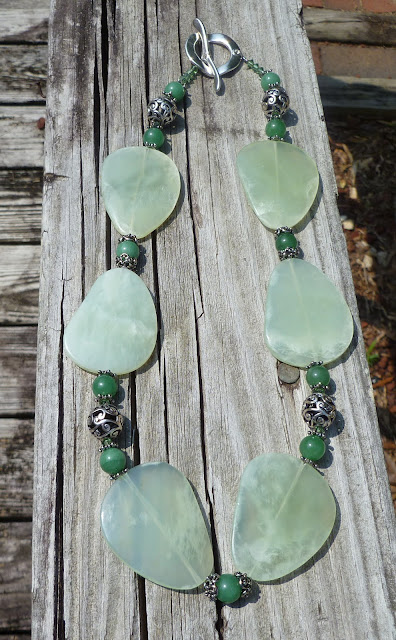 Lula is the complete opposite of Stephanie.  Lula is large and in charge! Lula is very flamboyant Black woman and loves to show it in her outfits.  I picture Lula with big and chunky jewelry.  I created this necklace using these large green stones that measure 21/2 inches long by 11/2 inches wide.  I also used 12mm Aventurine and 15mm silver tone filigree beads I added some 4mm green crystal bi-cones, bead caps, spacers, and a big funky toggle clasp.  I had two of the large green beads left so I made a pair of earrings to go with this necklace. 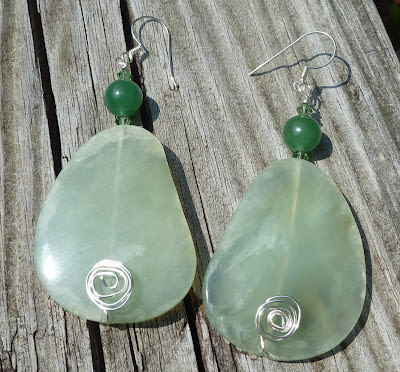 I did not have headpins long enough for these large beads so I took some 22 gauge silver tone wire and made a spiral on one end and the 4mm crystal bi-cones and 12mm Aventurine beads then wire wrapped the earring wires onto the earrings.  They are heavy, but that would not matter to Lula as long as they looked good.

Last but not least Connie... 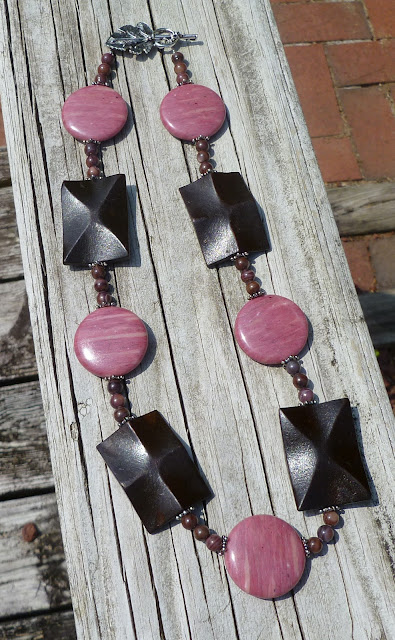 Connie is Cousin Vinnie's out spoken secretary.  Connie is your typical Jersey Girl that likes to dress in Jersey Girl fashion.  I created this necklace with Connie in mind.  This necklace is just enough to make a statement and not be all in your face.  I used 22mm round pink stone beads and paired them with fancy cut rectangle wood beads, between the big beads are 6mm round brown shell beads. and silver tone spacers. I used a grape leaf shaped toggle.

I hope that you like what I have created for this challenge and that you will pick up one of these books and read about these wonderful and colorful characters.

Here is the list of the other participants, please go by and see what wonderful creations they have created.

Thank you Erin for hosting another great challenge.

Posted by Therese's Treasures at 7:00 AM