She Made/She Made April Reveal 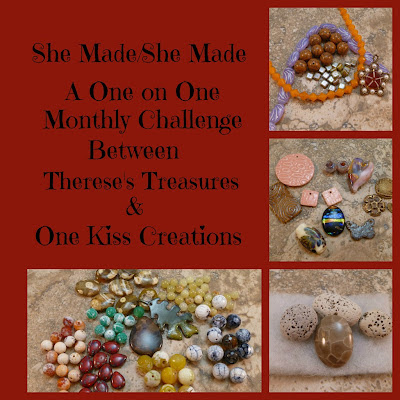 Wow it is already April 30th!  Man, this year is flying by!  As many of y'all know that follow mine and Christine's blog, each month we do the She Made/She Made from the beady gifts we gave to each other when we met in July of 2012.  This is what I chose for us to create with this month. 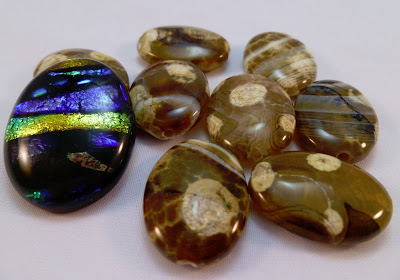 A beautiful glass cab and some really cool looking Agate ovals.  The glass cabs I won in a giveaway on Linda Roberts' blog two years ago and have been hoarding saving them, until I decided to share one with Christine.  The Agate I got at a trunk show at my LBS (local bead store).

Here is what I created with the Agate ovals... 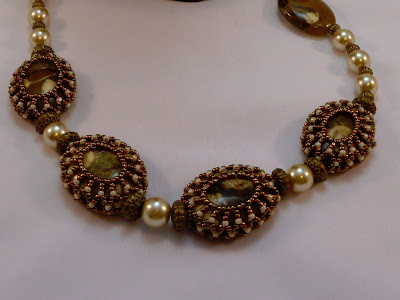 I was having a hard time trying to come up with a design to use with these ovals, until the other day when I got the June Bead and Button magazine in the mail. There on the cover was the solution to my problem.  The name of the tutorial in the magazine is Victorian Embrace designed by Sylvie Camps. 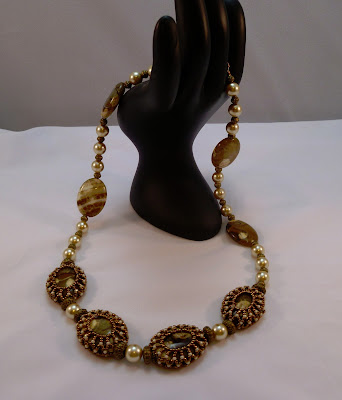 I was going to make the bracelet in the magazine, but then thought, "Come on! This is suppose to be a challenge, and what is the challenge in coping what is in the magazine!", so I made a necklace with glass pearls and metal findings. I am very pleased with how this turned out.

Here is what I made with the glass cab... 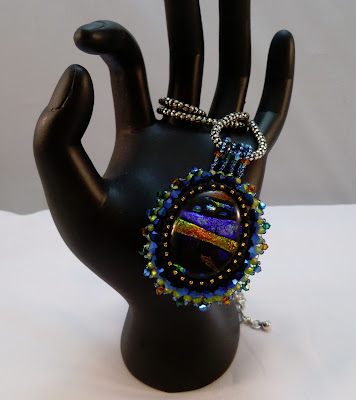 I originally had planed in making a cuff with this cab, but time was running out on me, so it became a pendant, which I literally just finished about 3 hours from the time that I wrote this blog post.  The only beads that I knew for sure that were going into this piece were the matte black 11 seed beads, the gold 15 seed beads. and the metallic blue bi-cones, the rest were last minute decisions. 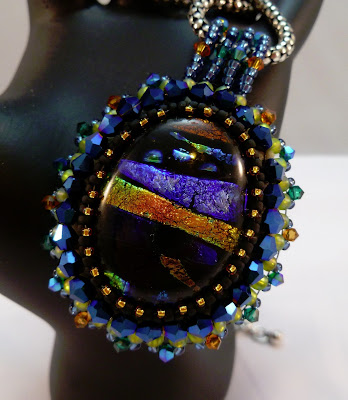 I am amazed at how pretty this turned out.

Christine sent me an email with the pictures of what she made with the April picks asking me if I could display them on my blog post, because she was having problems posting on Blogger, but then she sent another email saying that she was able to post using her daughter's computer.  I am going to post Christine's pictures just in case she runs into more problems.
Here is what Christine made... 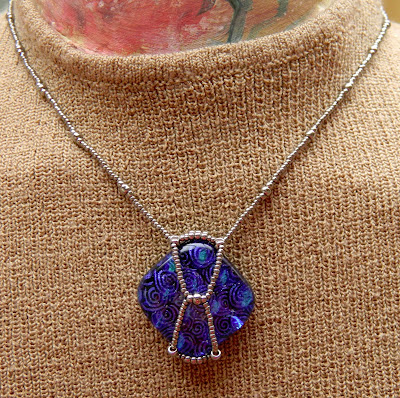 I love what she did with the cab I gave to her.  I had looked at this cab so many times and was always puzzled with how I would use it.  Christine did an awesome job at cradling the cab with seed beads. 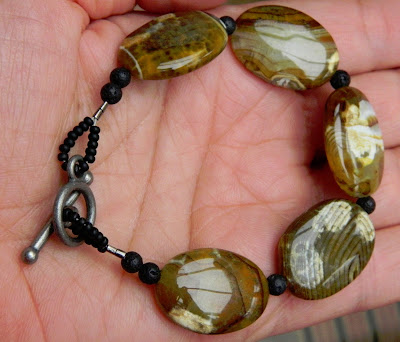 I love the simple, but yet beautiful design of the bracelet Christine made with the Agate ovals.

Well hopefully Christine was able to post on her blog and y'all can go by her blog and read how she came up with these designs.

I hope you enjoyed viewing what we made this month and will come back at the end of next month to see what we did in May.

Posted by Therese's Treasures at 3:00 AM