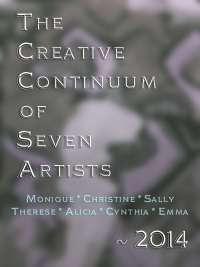 It is time for May's reveal for the CC7A and this month we are creating with the package Alicia sent to the other six in the group of seven.
Back in the latter months of 2013 Alicia Marinache of All the Pretty Things blog asked seven of her blog friends if we would like to participate in a challenge that would cover 7 months, of course we all said yes. So we were assigned months, we picked themes for our months, and shipped out packages with all sorts of little goodies to design with.

Here is a picture of what Alicia sent to me to create with... 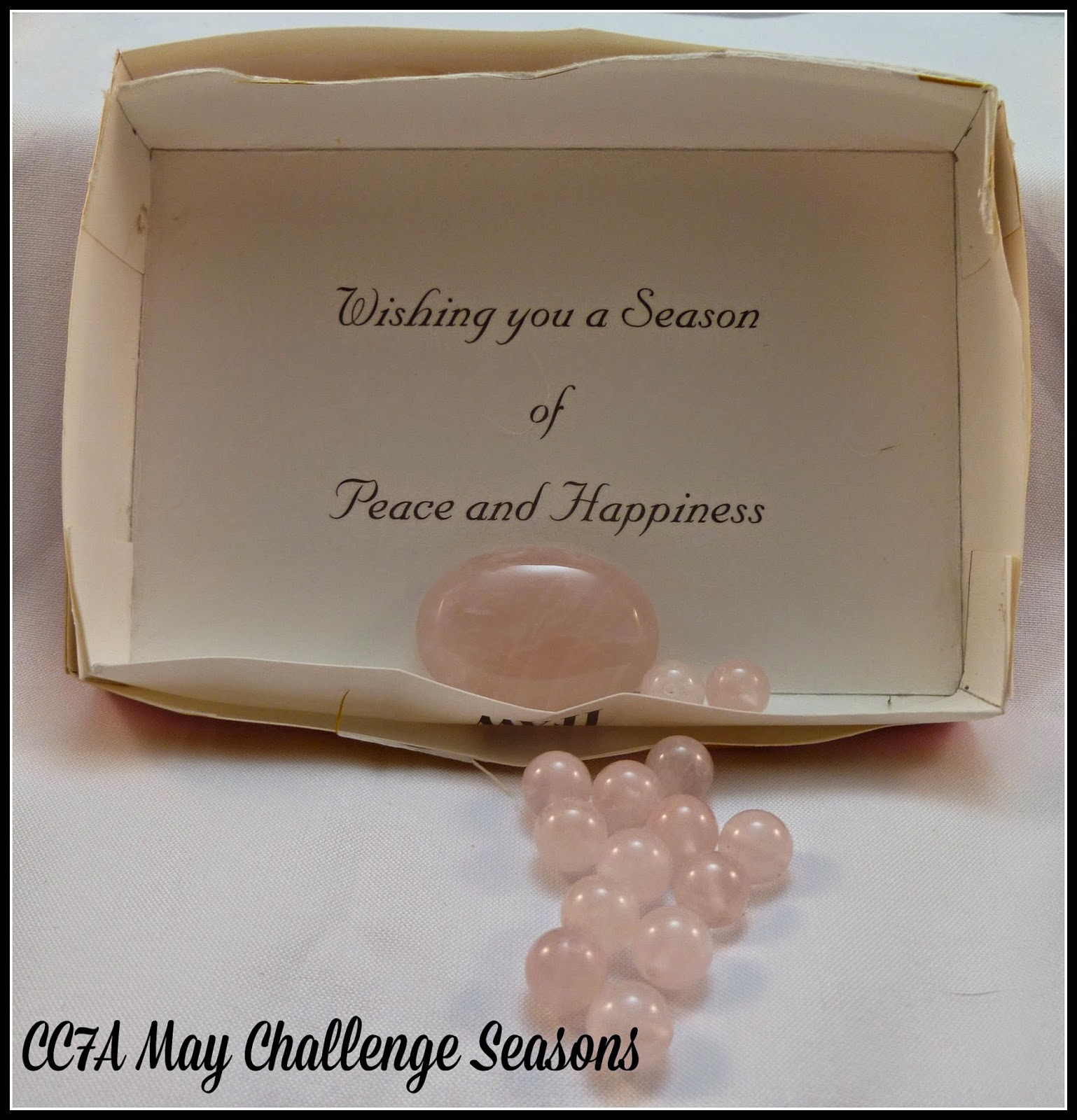 Alicia sent me Rose Quartz in a cabochon and 8 mm round beads.  It took me a little while to think of what I was going to make with my set.  I did not want to do bead embroidery this time I have done that with every month's challenge so far.  So I used my newly learned, and still learning, skill wire wrapping. Also since Alicia is a wire wrapper too, it is a tribute to her far better skills as a wrapper.

I had seen on Pinterest wire wrapped Tree of Life with a cab in the background and I had my inspiration. My first idea was to use different colors of seed beads on the branches to represent the different seasons in the year, but after making the tree I decided that I just did not like how it looked once I got the chain made, so back to the drawing board I went.  Here is the final design... 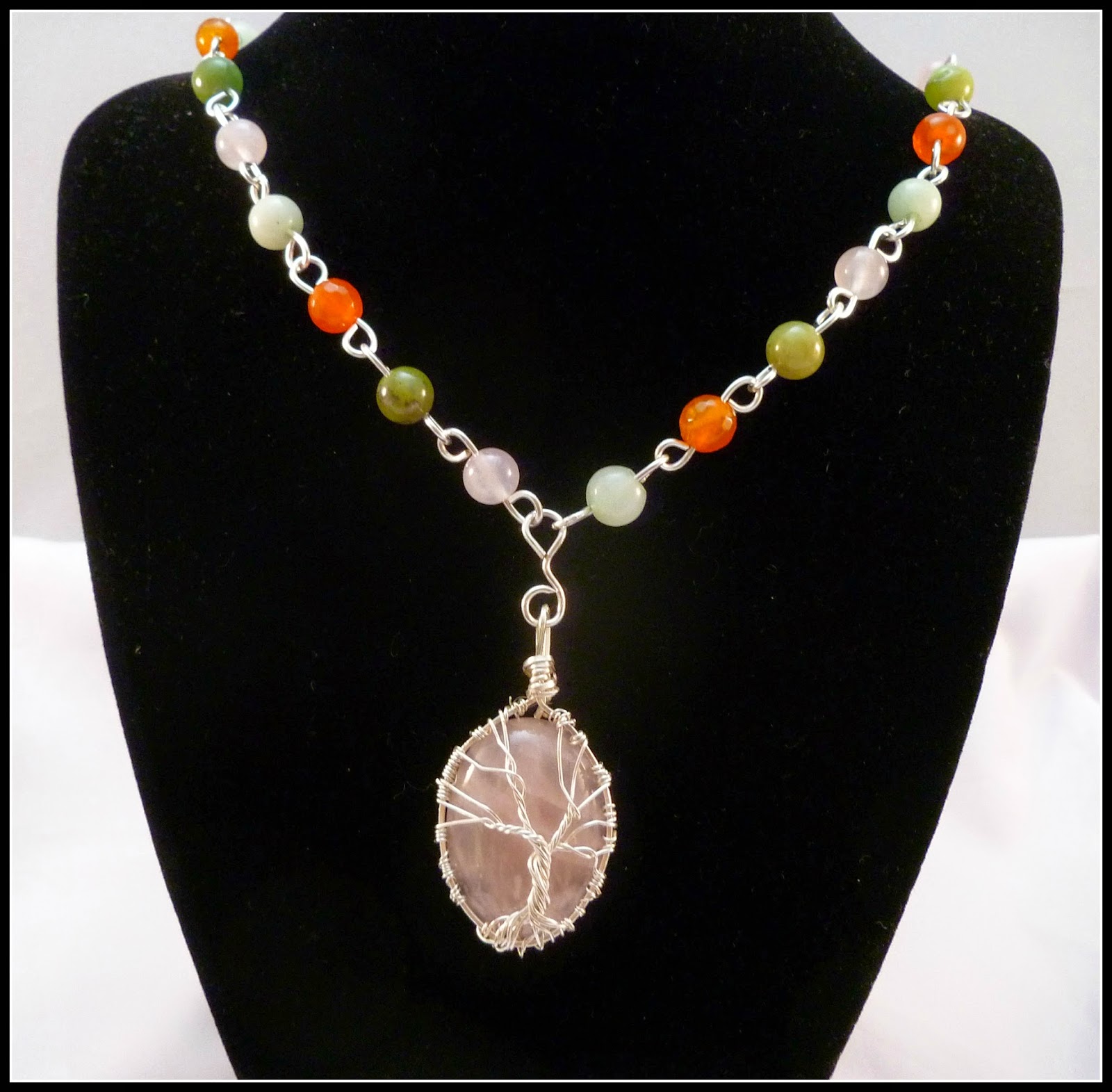 The Rose Quartz represents Spring, the green Jade represents Summer, the orange Carnelian represents Autumn, and the icy blue Aquamarine represents Winter.  I used silver wire as to not take away from the natural beauty of the stones. 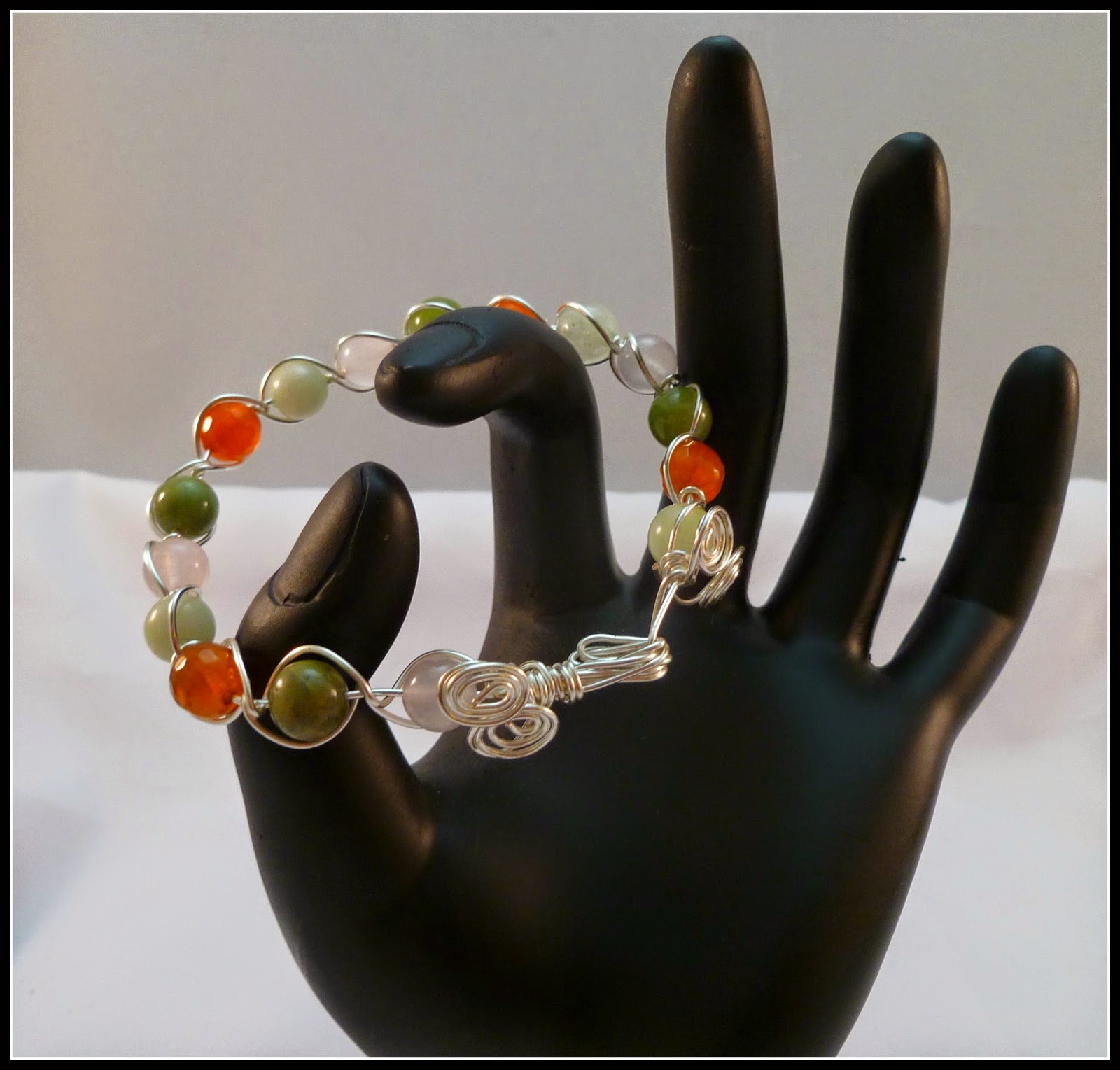 I had several of the beads left from the chain I made so I wire wrapped a bracelet.  This is a very simple design that is very easy to make. 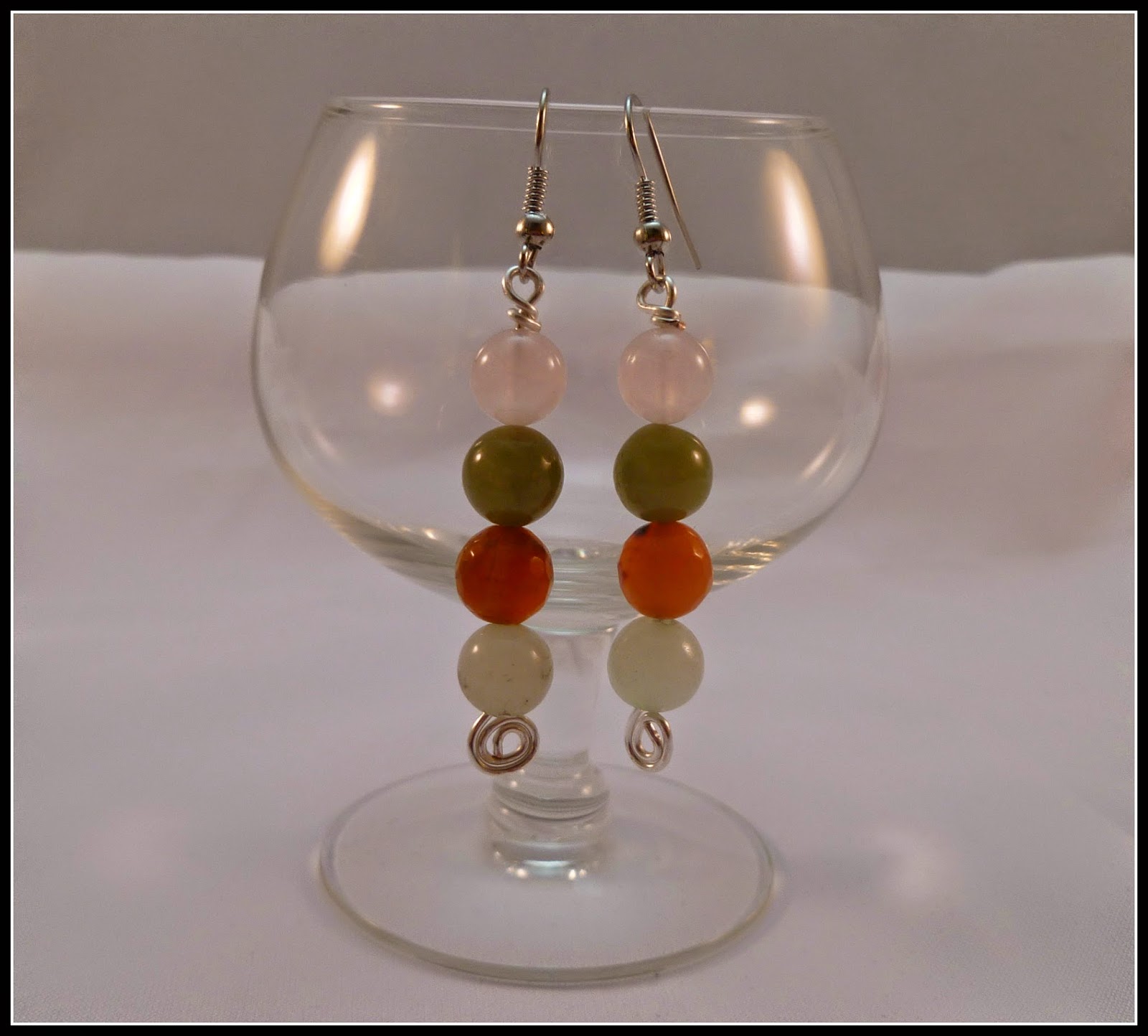 You can not have a full set with out earrings. 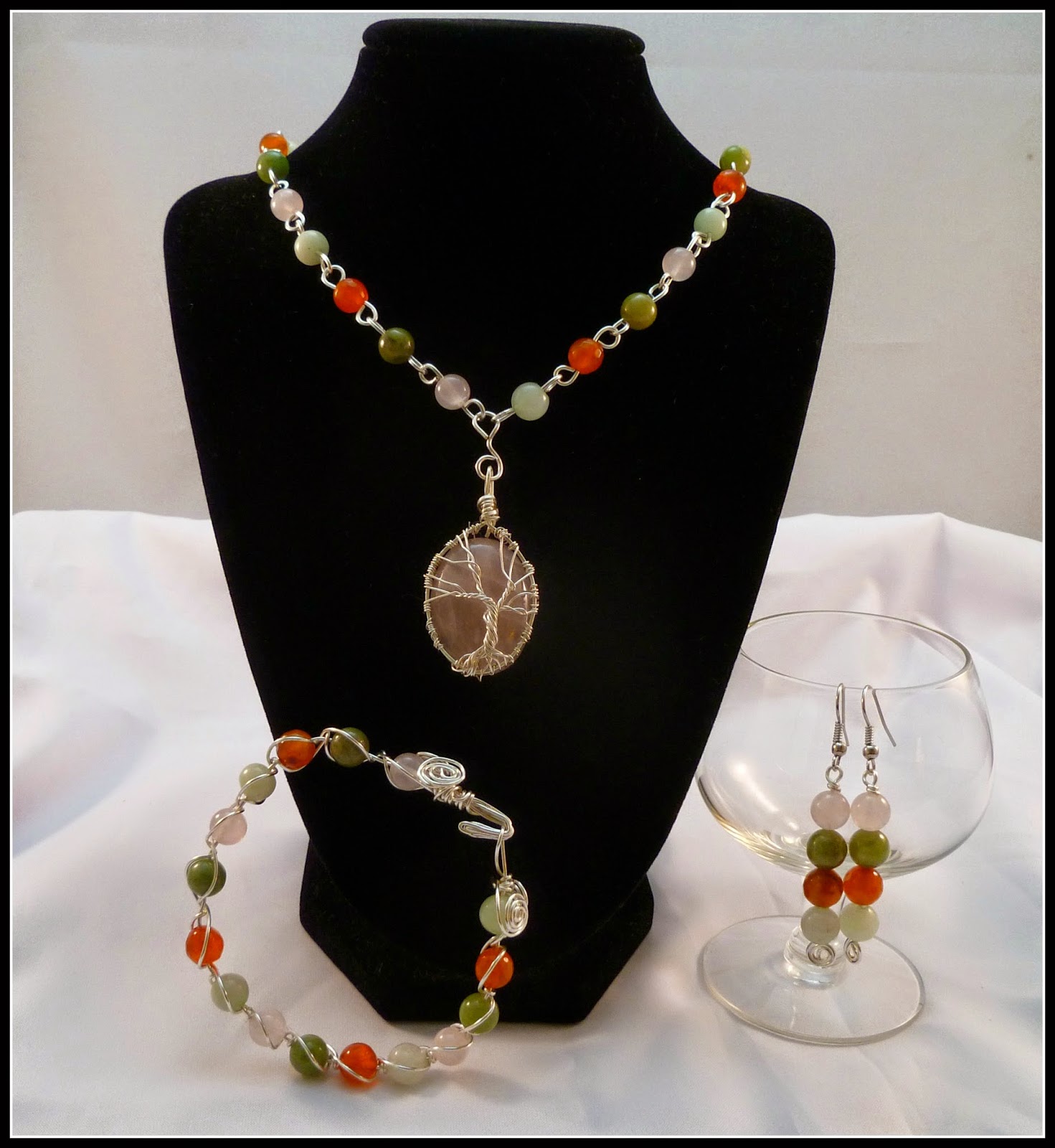 The whole set.  The neck chain is 22" long and has a lobster clasp.

Thank you Alicia for this great idea of bring together six of us talented ladies to join you in this adventure of creating something new each month with the package provided.  It was a joy creating with the Rose Quartz that you sent to me.

Next month is Cynthia's month her theme is "Something Old, Something New, Something Borrowed, Something Blue, so be sure to come back next month and see what I created with the package Cynthia sent.

Now please go and visit my fellow CC7A members and see what they created with Alicia'a package.

No jewelry this time I wanted to share my excitement with y'all, the city I live in is one of the 10 best historical cities in the USA.  I am going to share with you the 10 best starting with the 10th and working down to the 1st, so here goes...

in 1718, French colonist Sieur de Bienville established a port city named La Nouvelle Orleans near where the Mississippi River met the Gulf of Mexico. Much of the city was destroyed by fire during the brief period of Spanish rule (many of the city's historical buildings were built by the Spanish, not the French). The city came into U.S. control as part of the Louisiana Purchase in 1803. New Orleans also witnessed the culminating battle of the War of 1812, where Andrew Jackson's troops - joined by Jean Lafitte -defeated British forces.
Photo courtesy of Spondylolithesis/iStock

Philadelphia
It's impossible to study U.S. history without exploring the history of Philadelphia, the birthplace of American democracy. Independence Hall, in the heart of what is now Philly's Independence National Historic Park, witnessed the signing of the Declaration of Independence, and the formation of the U.S. Constitution 11 years later. While historians debate Betsy Ross's true role in creating the original American Flag, the famous seamstress made her home in Philadelphia.
Photo courtesy of G. Widman for Visit Philadelphia

Santa Fe
Pueblo settlements in and around Santa Fe date back to the 10th century, but the city itself wasn't established until 1607. It became the capital of the Spanish province of Santa Fe de Nuevo Mexico in 1610, making it the oldest state capital in the country, and it's also home to the nation's oldest public building (the Palace of the Governors) and the oldest community celebration, the Santa Fe Fiesta, first held in 1712 to commemorate the Spanish reconquest of New Mexico.
Photo courtesy of MarkKane.net

Boston
From baseball to higher education and everything in between, Boston's rich history is evident everywhere you look. Incorporated as a town in 1630, Boston saw the founding of the first college in North America - Harvard University - in 1630, just 16 years after the pilgrims first arrived. In 1773, the infamous Boston Tea Party was the first act of open rebellion against British colonial rule, setting in motion events that would eventually lead to the birthing of a new nation.
Photo courtesy of coleong/iStock

St. Augustine, Fla.
Nicknamed the "Old City," St. Augustine was the first European settlement in the U.S., discovered in 1565 some 55 years before the pilgrims arrived at Plymouth Rock. History is in evidence throughout the city, from the preserved walls of 17th century Castillo de San Marcos to the beautiful Flagler College, built as a hotel by Henry Flagler during St. Augustine's rise in popularity as a winter resort town in the late 19th century.
Photo courtesy of Floridashistoriccoast.com

Charleston, S.C.
Founded by English colonists in 1670, Charleston was one of the continent's most prosperous and influential cities by the mid-18th century, thanks to its production of rice, indigo and cotton on large, slave-worked plantations. This prosperity would continue until Civil War fighting largely devastated the Antebellum city. Luckily, Charleston also produced one of the nation's earliest historical preservation societies, so walking through the historic streets feels like stepping back in time.
Photo courtesy of Bill Stamatis/iStock

Savannah, Ga.
Recorded history of Savannah begins in 1733, the year when General James Oglethorpe and the good ship Anne made landfall along the Savannah River front and the colony of Georgia was established. Considered America's first planned city, Savannah still has 22 of its original 24 public squares, thanks in part to the Historic Savannah Foundation who helped forge one of the country's largest National Historic Landmarks, Savannah's Historic District.
Photo courtesy of Georgia Department of Economic Development

Williamsburg, Va.
From 1699 to 1780, Williamsburg was the political and cultural hub of the largest and most influential American colony, Virginia. Not only does Williamsburg have a storied history, it's managed to bring that history to life right before visitors' eyes in Colonial Williamsburg, a re-creation of what the influential Virginia colony might have been like on the brink of the Revolutionary War.
Photo courtesy of Brianna May/iStock

Annapolis, Md.
Founded as a small English community in 1649, Annapolis was known by several other names before it was named after the Queen in 1702. During the early years of the 18th century, the colonial capital was a political, economic and cultural powerhouse, and the Maryland State House, built in 1772, is the first and only state house to serve as the nation's capitol, which it did from 1783 to 1784.
Photo courtesy of VisitAnnapolis.org

Montgomery, Ala.
In 1819, two small settlements of cotton plantations merged together to form the town of Montgomery. During the Civil War, Montgomery was home of the First White House of the Confederacy, where Jefferson Davis and his family lived, but its most important historical contributions came during the Civil Rights movement as the site of the Montgomery Bus Boycott, led by Dr. Martin Luther King, Jr. The city also had the first electric street car system, and the first flight school set up by the Wright Brothers.
Photo courtesy of VisitingMontgomery.com

The above pictures and commentary was taken from this web site 10best.com

The other nine cities have always been on my bucket list to visit and I have every intention of checking each of them off my list one day. Congratulations to all for making the 10 Best list.