I thought that I would share with you some of the tutorials that I have beaded that were written by some lovely people that I have met through the blogs.

First up are two tutorials that I got from Christine Altmiller of One Kiss Creations.  Christine is a wonderfully talented person, she not only bead weaves she also makes these wonderful wrap bracelets using rocks as the focal.
So a while back Christine had made this bracelet that I was totally smitten with and I had wrote to her to find out how she made it and if she had a tutorial for it.  She told me that she was in the process of writing one and that when she was finished if I was still interested she would send it to me.  Well so time had gone by and Christine wrote and said that if I was still interested in the bracelet that it was being published in Bead Trends magazine and that she would send me the tutorial after she got her magazine.  I was thrilled for two reasons because I was still interested and that I had became friends with another person that had been published. The first friend I made that had been published was Lola of Bead Lola Bead.  Well when I was at Hobby Lobby I notice the Bead Trend magazine, that Christine's bracelet was in, was on sale so I bought it. Oh and by the way Lola had a pair of peyote stitched earrings published in the same issue.

Here is my version of Christine's bracelet.

I gave this bracelet to my Sister. She loves it and wears it often.

The second tutorial of Christine's that I did was what she calls the Zig Zag stitch, which is really the triangle stitch, it just looks like little Zig Zags.  She used this stitch in her piece she did for Erin Prais-Hintz's Music Challenge. I thought it was pretty cool looking so I asked Christine how she stitched it and she sent me instructions.

Here is my version of the Zig Zag stitch. 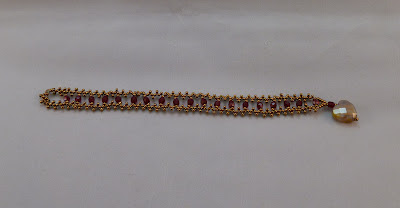 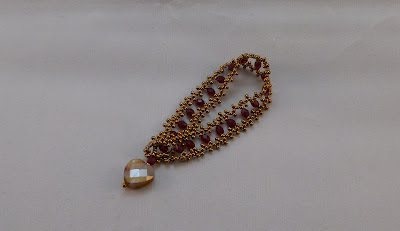 I gave this bracelet to Marla Gibson of Spice Box Designs when we met on May 31st this year.  I used size 15 bronze seed beads and 4mm garnet Czech fire polished crystals and a faced crystal heart for the clasp.

Next is a tutorial that I just recently did by Amy Severino of Amybeads. Amy is a beautiful, loving, giving, and talented bead weaver. We have had long conversations through emails. I enjoy conversing with Amy. She has hosted two challenges this year and I have participated and I am participating in these challenges. I first saw this bracelet on Kristen Steven's blog.  Kristen tested the tutorial for Amy and when Amy blogged about her tutorial and said that the tutorial was for sale I just had to get it.

Here is my version of Amy's Beauteous Bangle 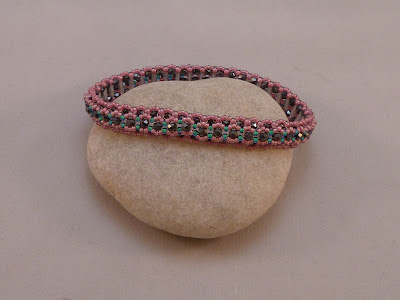 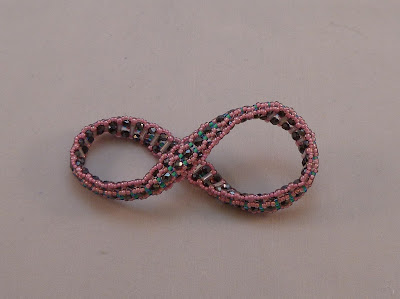 This bangle worked up very fast and Amy's instructions were very easy to follow.  This one I will keep.

The next tutorial belongs to Kristen Stevens of My Bead Journey. I fist saw Kristen's bracelet on Amy's blog where she had tested it for Kristen.  Amy and Kristen do not live that far away from each other.  Kristen is a wonderful talented and creative bead weaver, that is always there to lend a hand or give you a pick up with a nice comment or two.  I knew when I saw the bracelet and found out that the tutorial was for sale at Kristen's shop I had to get it and make it.

Here is my version of Kristen's Pop Out Pearls bracelet. 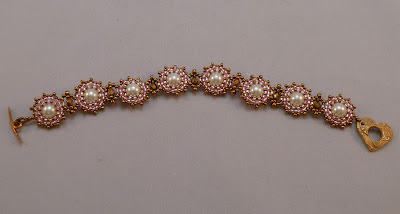 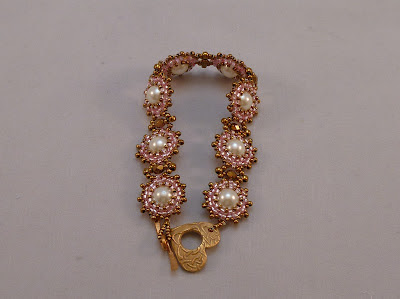 I will be keeping this bracelet also.  I love how it turned out.  Kristen's instructions were easy to follow I did not have any problems stitching this bracelet, although it did take me longer then just a few hours to make.  The clasp I used is one of Lesley Watts' bronze metal clay heart clasps for her THEAtoo Etsy shop.

Now the last of my friend's tutorials that I have done belongs to Lesley Watts of The Gossiping Goddess.  Lesley had done this technique in a piece that she did for the Bead Soup Blog Party back in September of 2011.  So many people had asked her how she did it, that she decided to write up the tutorial and put it on her blog for anyone that wanted to try it.  Lesley is an very talented jewelry designer and PMC artist.  Lesley is also a very kind, beautiful, and giving woman that is always there to give a nice comment.

Here is my version of Lesley's tutorial. 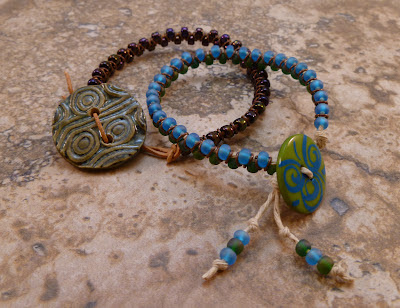 This tutorial works up really quick and is very easy to do.  These bracelets would be great for Teens to give as friendship bracelets.  The green clay button I purchased awhile back from Chinook Jewelry Designs Etsy shop.

I have on last piece to show you it is not from a tutorial it is a rosary that I made for my Sister for no reason except I just want to make one for her.  I made this rosary using lamp worked beads by Juli Cannon of StudioJuls.  Juli is an awesome lamp work artist.  I love her beads and I am hoarding several I just take them out and look at them and then I tuck them back into their bags and put them away.  I will make something with them eventually, but just not yet.  Juli is another beautiful kind and caring person who has so much love to give to not just people, but to animals too.

Here is the rosary I made for my Sister. 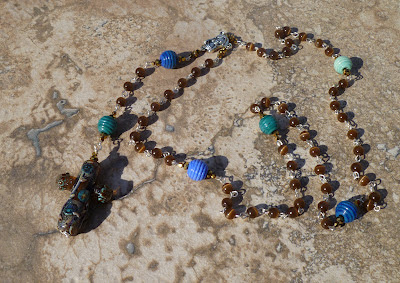 When I saw the cross that Juli had made I just had to have it for my Sister it is in all of her favorite colors.  I also purchased the rib beads that matched the colors in the cross.  I found the cat's eye brown glass beads and the connector at Hobby Lobby.

This is all I have for you for now.  I hope you enjoyed viewing what I made with the tutorials from these wonderful and beautiful women.  So until next time...

Posted by Therese's Treasures at 10:31 PM